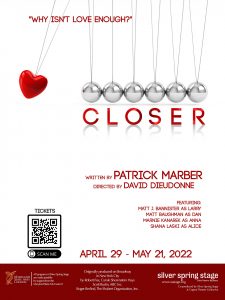 Four lives intertwine over the course of four and a half years in this densely plotted, stinging look at modern love and betrayal. Dan, an obituary writer, meets Alice, a stripper, after an accident in the street. Eighteen months later, they are a couple, and Dan has written a novel inspired by Alice.

While posing for his book jacket cover, Dan meets Anna, a photographer. He pursues her, but she rejects his advances despite their mutual attraction. Larry, a dermatologist, “meets” Dan in an internet chat room. Dan, obsessing over Anna, pretends to be her and has cybersex with Larry. They arrange to meet the next day at an aquarium. Larry arrives and so too, coincidentally, does the real Anna. This sets up a series of pass-the-lover scenes in which this quartet struggle to find intimacy but can’t seem to get closer.

A co-production with Cogent Theater Collective.

This play includes frequent coarse and sexualized language, shaming, threats of violence, states of undress, and an act of domestic violence. If you have further questions about any content please contact our Production Team at CogentTheaterCollective@gmail.com.