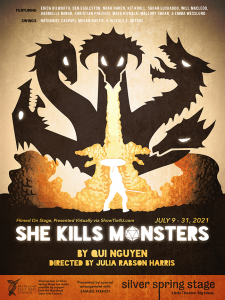 She Kills Monsters
by Qui Nguyen

Agnes Evans has lost her family in a car crash and decides to embark on a quest to learn more about her teenage sister, Tilly, who in life had remained a distant mystery to her. When she discovers Tilly’s Dungeons & Dragons notebook containing a game scenario she created, Agnes gets a glimpse of the imaginary world that may have provided a safe place for Tilly that she didn’t have in her “real life.” Agnes sees her sister in a way she could have never imagined fighting alongside supermodel elves, nasty ogres, and homicidal fairies. Together with the help of Chuck, Tilly’s friend who Agnes convinces to take on the role of “dungeon master,” these secret warriors give Agnes a chance to celebrate and honor her sister and breathe new life into her own understanding of what is possible for herself.