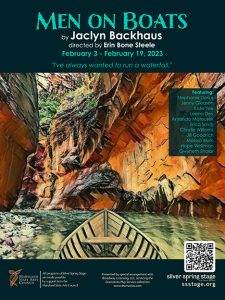 This account of a geological expedition down the Green and Colorado Rivers in 1869 is based on the journals of John Wesley Powell and his crew of pioneers. These historical figures were all cisgender white males; the cast portraying them will be made up entirely of people who are not. In this bold and refreshing approach, the play bridges the gap between then and now in ways that highlight the ludicrous arrogance of the Western colonizers while recognizing their bravery and fearlessness. The theatrical dissonance between the performer and the role allows for comedy, commentary, and satire, offering the audience a chance to reconsider a moment in history without being beholden to the men whose voices have traditionally dominated our understanding of it.