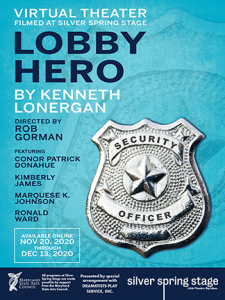 Jeff, a white twenty-something guy, works as the new lobby security guard at an apartment building in New York City, where the story is set. He is someone who has likely been called a “loser” and by more people than just his own father. He is trying to get his life together and has a lot of respect for his boss, William, a tough, strait-laced African-American guy around his own age. He also idolizes the “real” city cops who work the area surrounding the apartment building… especially the pretty one, Dawn. Dawn’s partner, Bill, is larger than life and gives Jeff another person to look up to. When his boss’s brother gets accused of participation in a robbery-murder and as Dawn works to walk the line between being a “good cop” and standing up to sexual misconduct on the force, the play shines a light on the racial bias and sexism inherent in America’s justice and law enforcement systems with a surprising dose of endearing sweetness.