Back of the Throat 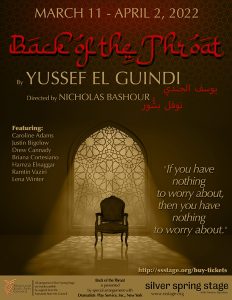 Back of the Throat
by Yussef El Guindi

In this darkly comedic and politically charged play, the audience is invited to examine the balance between freedom and fear, and to question what they would be willing to sacrifice in exchange for feeling safe. With equal doses of intellect and humor, Back of the Throat devolves from a seemingly friendly visit by two government officials into an out-and-out inquisition. The story takes place in the home of Khaled, an Arab-American writer who is being accused of possible ties to terrorists. As the probe continues, and the officials reveal their “evidence,” – including testimonies from witnesses we encounter through flashbacks – are we being shown the truth? Or, rather, are we left with a different appreciation of what euphemisms like “person of interest” seek to obscure? Filtered through the lens of the Arab-American experience, Back of the Throat leaves the audience to question what it really means to be an American.