Ada and the Engine 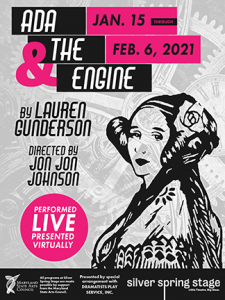 Ada and the Engine
by Lauren Gunderson

“It is not to be missed.” – DC Metro Theater Arts
“Very much worth watching.” – Maryland Theatre Guide

At age 18, Ada Byron is fixated on mathematics, music, and the legacy of her absent, infamous father poet Lord Byron. When she meets Charles Babbage — whose conception of the Difference Engine was a critical first step towards the computer — the two begin a long intellectual partnership, with suppressed romantic undercurrents. Ada’s mother works hard to keep her daughter from a marriage of passion to a man significantly older that is sure to provoke scandal and pushes her to marry Lord Lovelace instead. Over time, Ada still finds a way to provide critical insights into the would-be Engine and playwright Lauren Gunderson gives us a glimpse of another woman from history whose life and contributions have been kept out of our public consciousness.